Guide to Investing in Williamsburg, VA

Guide to Investing in Williamsburg, VA

Real estate investors looking at Virginia have several great markets to choose from. There’s something for everyone — from large urban areas to small, rural towns.

One excellent market is the city of Williamsburg. Sitting just 50 minutes southeast of Richmond, Williamsburg is one of the oldest cities in the United States. It offers residents the charms and attractions of a historic small town, but it’s growing rapidly and has plenty of modern amenities.

If you’re looking to add Williamsburg properties to your real estate portfolio, here are some things to know:

Williamsburg is a small town with only 15,697 residents. However, it has grown at a healthy rate for 60 years. World Population Review found Williamsburg’s population grew by about 11% in the past decade.

Williamsburg appears to have a healthy economy. This draws residents and helps them earn more, meaning real estate investors could earn a higher return on investment.

Williamsburg’s economy is largely tourism-driven, thanks to Colonial Williamsburg. The College of William & Mary also makes education a large industry in the city.

The following sectors are also popular across the metro area:

Major employers aside from Colonial Williamsburg and the College of William & Mary include:

Williamsburg residents earn less than those in the metro area and Virginia. However, it’s important to remember that the metro area contains popular, larger cities like Virginia Beach and Norfolk. Meanwhile, Northern Virginia, near Washington, DC drives up the state’s median income because it includes some of America’s most affluent neighborhoods. 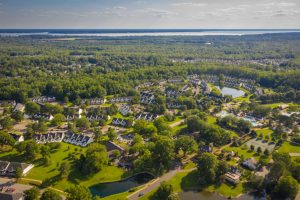 Each Williamsburg neighborhood will offer tenants different amenities and experiences. That means that each neighborhood will also draw a different type of tenant. Young, single professionals may prefer one community, whereas a family may look for something different.

Here are some communities to consider when picking a neighborhood to invest in:

This indicates strong homebuyer and rental markets in the area.

There’s a reason Williamsburg is growing fast and drawing in tourists — it offers an excellent location and plenty to do.

Colonial Williamsburg is the heart of the city and, essentially, a living history museum. From colonial-era buildings to souvenir merchants, there’s a lot to experience. Tourists and residents can even dine and drink in the same buildings the Founding Fathers did centuries ago.

Williamsburg is also part of the “Historic Triangle” with nearby Jamestown and Yorktown. This offers a long list of historic landmarks and options for sightseeing.

There’s more than history to Williamsburg, though. The city has lots of popular parks, such as College Landing Park and Freedom Park. Residents and tourists alike can enjoy entertainment at the Bounce House Family Entertainment Center, visit Busch Gardens Williamsburg, or try out Go Ape Treetop Adventure.

Williamsburg’s conveniently located near the coast, too. Newport News — half an hour southeast — has Huntington Park. Another hour southeast is Virginia Beach.

The coastal proximity means Williamsburg gets humid summers. Winters are quite cold as well. However, the area does see all four seasons.

Williamsburg is a fairly safe city. It has consistently lower property and violent crime rates than Virginia and the US. Crime has gradually decreased over the past two decades as well, with property crimes dropping faster.

Neighborhoods in and just north of Williamsburg proper have some of the area’s highest crime rates. These include communities like:

Southwest and further north away from the city contain neighborhoods with some of the area’s lowest crime rates. These communities include:

Regardless of neighborhood, security measures such as cameras and callboxes can enhance tenant peace of mind and increase your investment returns.

Williamsburg is also home to the elite College of William & Mary. Depending on your investment goals, William & Mary students may be a great rental market to consider.

Williamsburg may be small, but it’s growing fast and full of young, eager residents. A healthy economy, good schools, safe neighborhoods, and historic attractions draw in a variety of tenants. Thus, Williamsburg appears to be a promising real estate market.

Whether you’re purchasing one Williamsburg home or one hundred, you don’t have to go it alone.

Bradley is a DFW, Texas-based copywriter with extensive experience writing in business, finance, and adjacent niches. In his free time, he likes lifting, reading, coffee, and spending time out in the Texas sun.

7 Amazing Strategies to Market Your Rental Property
How Much Do Property Managers Charge in St. Louis