In recent months, the St. Louis real estate market has been characterized by limited supply, competitive demand for rentals, and high prices. As a result, rental homes are in demand, and real estate investors are in luck.

According to Redfin, the average home in St. Louis sold for $214K in May 2022, which is a 1.7% bump compared to last year. A whopping 830 homes were sold in St. Louis throughout that same month. The average property was sold around 4% higher than the list price, and the offers closed in an average of 7 days. On the high end, certain homes  sold for up to 12% above asking price.

As such, the St. Louis housing market is still a seller’s market, meaning there are more buyers than there are homes for sale. This makes St. Louis a great rental investment, as you’re highly likely to get significant ROI (return on investment) while many would-be buyers wait for prices to drop.

Let’s explore some of the additional key trends and stats that make the St. Louis housing market so exciting.

Over the last decade, the population of St. Louis has increased by only 1.2%. In recent years, however, families from other states have started migrating to St. Louis because of the more affordable costs and the excellent quality of life compared to those bigger cities. 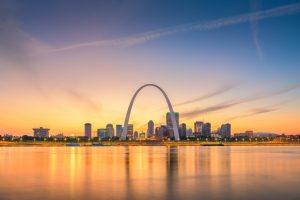 While employment rates lag nation-wide post-COVID 19, St. Louis’ job market shows promise. According to Data-USA, the local job market has grown by just 0.02% in the last year. While certainly a small figure, the important takeaway is that employment numbers are trending in the right direction, however slowly. In fact, the unemployment rate in the St. Louis metropolitan statistical area (MSA) is down to a mere 3.2% – with most employment sectors on the rebound – according to the report by The U.S Bureau of Labor Statistics (as of Oct 2021).

The real estate market in St. Louis is booming, with the local real estate experts recommending buying property sooner rather than later. A report from KSDK TV stated that home seekers are looking to take advantage of the still-low interest rates and buy houses, the values of which are predicted to skyrocket in the future.

Single-family homes in St. Louis are met with strong demands from multiple buyers. It’s becoming a common occurrence, especially in the popular neighborhoods, according to the St. Louis Business Journal.

WalletHub called St. Louis’ rental market one of the finest there is. Their research analyzed the main factors home buyers use, such as job and population growth, position in the housing market, and preferences in renting or buying a house.

St. Louis is one of the most affordable housing markets in the country. The median cost of a home in St. Louis is around $160K. The general price trend is $105 to $120 per square foot, and many single-family homes go for less than $100K. Even some of the more expensive areas have properties coming in at under $500K.

Kiplinger even published a recent article where it awarded St. Louis an affordability score of 3 out of ten, on an index where 1 represents affordable markets and 10 represents high-cost ones.

Quality Of Life In St. Louis

The quality of life in St. Louis is unsurprisingly quite high. The affordable living cost and decent salaries both play a major role in keeping these residents content.

It’s clear that St. Louis offers a rich and promising rental market. After all, there are countless compelling benefits for investors and residents alike! The city also has plenty of growth potential, indicating unlimited potential for your real estate portfolio.

Whether you’re purchasing one St. Louis home or one hundred, you don’t have to go it alone.

Mehedi is a freelance writer for marketing, SaaS, and personal development businesses. He’s the founder of PowerhouseBlogger. Mehedi is growing businesses with sizzling writing, one piece at a time.