Redfin currently rates Detroit as only somewhat competitive. Yet, some factors indicate that this market could soon begin to heat up once more.

That means now could be the perfect time to jump into Detroit real estate.

So, if you’re evaluating the Motor City as your next real estate market, consider the following benefits:

In general, rents in Detroit have remained flat or increased slightly for many months. This indicates that Detroit real estate investors could see steady rental income.

Detroit’s population declined steadily through the 2000s as the city had a rough decade. However, Detroit began turning around in the 2010s. Finally, in 2021, the population shrink slowed down quite a bit. Now, the UN predicts the city will start growing again over the next few decades.

If that becomes true, now would be the best time to get in — especially since Realtor.com reports that Detroit proper is firmly a buyer’s market.

An explosion of growth in Detroit could lift rents and property values, benefitting early investors.

Real estate investors in any market can access several potential tax deductions if they qualify.

Look over the following tax breaks with your tax professional to maximize your after-tax real estate returns in Detroit:

Investors can’t use the homeowner mortgage interest deduction. That’s only for homeowners to use on a primary or secondary home.

However, investors may be able to deduct their mortgage interest as a business expense on a different tax form. This can immediately offset some of your real estate financing costs.

Investors can deduct depreciation on their taxes to represent property wear and tear. In the US, investors can generally depreciate properties for 27.5 years. That works out to 3.636%, which can be a significant deduction on most properties.

Investors may be able to capitalize costs related to obtaining a mortgage, such as closing costs, onto the property’s basis. This allows for a larger depreciation deduction if you qualify.

Keep in mind that you cannot depreciate land — only the building.

Investors can deduct “ordinary and necessary” expenses paid to manage their Detroit rental property and run their business.

Some potentially deductible expenses include:

Property taxes and insurance are necessary to own a property in almost any market. Fortunately, investors can often deduct these expenses on their federal income taxes.

According to IRS Publication 527:

“You can deduct the ordinary and necessary expenses of traveling away from home if the primary purpose of the trip is to collect rental income or to manage, conserve, or maintain your rental property.”

Some potential travel write-offs include:

Out-of-state investors will see the most benefit here. Plane tickets and accommodations can add up when traveling to manage properties. 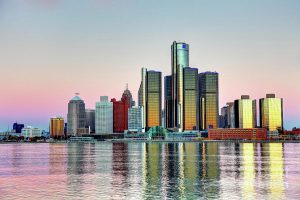 Detroit is most famous as the center of the global auto industry. The “Big Three” automakers — Ford, GM, and Chrysler — continue to employ massive numbers of people in the area. Hence, the “Motor City” moniker.

But cars aren’t Detroit’s only industry. Healthcare, education, government, logistics, and finance are also substantial. Here are some firms with headquarters or major offices in Detroit and its suburbs:

Detroit’s status as a manufacturing and finance center have helped propel its GDP steadily upwards since rebounding from the 2008 crisis. It saw a drop in 2020, as expected, but is recovering.

Detroit sits on the Detroit River, connecting Lake St. Clair with Lake Erie (one of Michigan’s five Great Lakes). Canada sits on the other side of the Detroit River — Windsor, Canada, is a popular destination just across the bridge. Sitting in between Detroit and Windsor is an island park, Belle Isle Park.

Detroit is known for its music history, from rock ‘n’ roll to hip hop to R&B. The latter helped Detroit get the nickname “Motown,” named after a record label of the same name.

Famous acts from Detroit include Alice Coltrane, Bob Seger, Eminem, Madonna, Marvin Gaye, and The White Stripes — among many more.

There is lots to do in terms of entertainment, too. Residents can catch a baseball game at Tiger Stadium, hockey game at Little Caesars Arena, or watch the Lions football team at Ford Field.

Dearborn, a Detroit suburb, is notable for containing the largest Muslim and Arab populations per capita in the United States. Arab-American culture is rich in this area.

Summers are pleasant and warm. They can get a bit humid, though. Meanwhile, winters are quite cold, snowy, and windy. Detroit residents enjoy all four distinct seasons.

In terms of housing, the city itself can be quite pricey in certain areas. However, the suburbs vary more widely. Certain areas like Birmingham are much more affluent. Therefore, property values are higher.

On the other hand, areas like Romulus and Hamtramck have far lower home prices and a cheaper cost of living.

Real estate in any market can offer steady income and diversification for investors while allowing them to potentially slash their taxes.

But Detroit, in particular, is worth a look. Its diverse economy, rich culture, and wealth of entertainment draw many kinds of residents and leave no shortage of investment opportunities.

If you’re looking at investing in Detroit but aren’t sure where to start, Evernest can help you out. We’ll help you find the best deals, close on them fast, and manage every aspect of your property.

Let’s talk — fill out our buyer’s form today to get started.

McKenna is an Evernest Content Strategist based in Denver, Colorado. Her expertise spans the real estate and home financing sectors. When not writing, she enjoys picnics, yoga, and antiquing.

Our Top Tips for Selling Your Rental Property in Columbus, Ohio
The Ultimate Question: Should I Invest in a Property With an HOA?