Your One Guide to Easily Investing in Northern Virginia

Your One Guide to Easily Investing in Northern Virginia

As the United States capital, Washington, DC offers plenty of job opportunities and things to do. However, it’s nothing short of expensive. Plus, the political backdrop creates a competitive and fast-paced feel.

Many who don’t want the big city lifestyle or cost of living opt for various Northern Virginia cities and towns. This creates ample opportunity in urban, suburban, and rural markets for real estate investors across this area of the state.

If you’re looking at investing in Northern Virginia, here are some things you should know:

Some of its most populous cities are DC suburbs, such as Alexandria. Other notable Northern Virginia cities include Fairfax, Falls Church, Fredericksburg, Manassas, and Winchester.

Northern Virginia is close to DC, so many of the area’s residents may commute to DC for work. As many know, the largest economic sector is government, and the federal government is one of the most significant employers.

Education, healthcare, and professional services are big in DC as well. There are many high-end government employees, lobbyists, and consultants in the area. This is partially why some of its counties, like Loudoun and Fairfax, have some of the highest median household incomes out of all large US counties.

Northern VA’s economy leans blue-collar. According to the Bureau of Labor Stats, trade, transportation, and utilities are some of the largest sectors in the area. However, the area has plenty of white-collar employees.

Major employers in Northern Virginia and Washington, DC include: 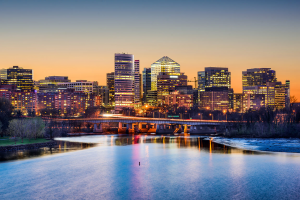 Northern Virginia stretches from the urban areas near Washington, DC, to smaller towns like Fredericksburg and rural regions near Shenandoah National Park.

Here are some Northern VA cities to consider:

Northern Virginia has some of the higher median home values in the state and the nation, thanks to affluent areas like Alexandria and Arlington. For example, RedFin found Alexandria’s median sale price to be $617,450, and that’s down from last year.

Still, Alexandria’s housing market scored a 77/100 on RedFins’ Compete Score, making it Very Competitive. Homes spent a median of 18 days on the market.

Nearby Fairfax County has an even hotter market. The median sale price is $675,000, and homes only spend a median of 11 days on the market.

Naturally, home values decrease as you move out into the rural areas. However, this makes them more affordable for investors.

US history surrounds Northern Virginia residents. They can drive up to DC to see the Washington Monument, Lincoln Memorial, Jefferson Memorial, and much more. The Smithsonian Museum network offers fascinating displays, from air and space to natural history and more.

Virginia’s also steeped in history because it’s one of the original 13 colonies and the 10th official US state.

Residents can drive down to Virginia’s capital, Richmond, for plenty of Revolutionary and Civil War museums and sights. More historical landmarks dot the Northern Virginia landscape in cities like Alexandria and Fredericksburg.

Nature lovers will enjoy parks like Great Falls National Park, the Occoquan Bay National Wildlife Refuge, and Meadowlark Botanical Garden. Virginia Beach is only a few hours away — perfect for a weekend trip.

Northern Virginia has all four seasons in terms of climate. Summers are muggy, and winters are cold. However, the weather is more bearable than states further north and south.

Crime rates are essential when investing in Northern Virginia real estate. Properties in safer areas may draw wealthier residents but cost more. On the other hand, areas with higher crime rates will feature cheaper properties, but rents will also be lower.

Per Neighborhood Scout, the more urban areas in Northern Virginia generally see higher crime rates. The city centers in Arlington, Alexandria, Fredericksburg, and Winchester have some of the highest. Smaller towns like Sperryville and Chester Gap have low crime rates.

Still, investors shouldn’t rule out big cities solely based on crime rates. Some areas within big cities may be safer than others. Besides, security measures like cameras and call boxes can increase tenant peace of mind and help investors boost their returns.

According to WalletHub’s in-depth analysis, Virginia has the fourth best public schools in the nation. It falls behind just a few New England states — New Jersey, Connecticut, and Massachusetts. Plus, Virginia was the sixth most educated state in the nation as of 2021.

Many of Virginia’s best schools are in Northern Virginia, per US News rankings. These include:

Strong public schools in these Northern Virginia communities can draw in plenty of families who want a good education for their children.

College students may also be a good rental market for Northern Virginia real estate investors. The region is home to numerous institutions of higher education, such as:

Numerous other colleges and universities in Virginia and from other states have satellite campuses in Northern Virginia as well.

Northern Virginia offers residents an excellent way of life. It’s close to Washington DC jobs and attractions, but not far from the beach and the outdoors.

As a result, the area is home to affluent residents and several major employers. The historical charm and strong schools only strengthen the area’s attractiveness for families and young professionals alike.

So, if you’re looking to start or build your real estate portfolio, do yourself a favor and don’t skip over Northern Virginia.

Whether you’re purchasing one Northern Virginia home or one hundred, you don’t have to go it alone.

McKenna is an Evernest Content Strategist based in Denver, Colorado. Her expertise spans the real estate and home financing sectors. When not writing, she enjoys picnics, yoga, and antiquing.

Inflation, Investment Types, and Increasing Rents: What You Need to Know
6 Secrets Every Accomplished Investor Understands