The Orlando housing market continues to break records and make headlines. And from the looks of it, this red-hot market isn’t cooling down any time soon.

Inventory of homes for sale increased by almost 50%, according to a recent report released by the Orlando Regional REALTORSⓇ Association (ORRA), and home values continue to take off. The report shows also that the median home price in the Orlando area in May 2022 was $379,950. This figure is a nearly $10,000 spike from April – a record high for the fourth month in a row.

One key reason why Orlando remains one of the strongest markets in the nation is the influx of buyers from high-tax and high-cost living areas like:

The lower cost of living and less densely-populated areas make Orlando desirable to These transplants. Businesses are also moving in to take advantage of affordability and easier access to greater amounts of resources.

Interest piqued? Let’s dive into why investing in Orlando could be your wisest decision in 2022.

What Is The Quality Of Life In Orlando? 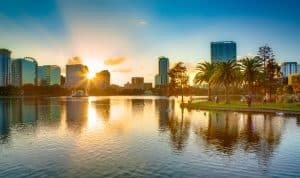 Orlando is one of the best places to live in. It’s located in Orange County, Florida, near the center of the state. Residents enjoy a mix of urban and suburban living, with the majority of residents renting their homes.

When Niche.com polled 1,800 Orlando residents about how they liked living in the city, an overwhelming 86% said it was “excellent” or “very good”.

In fact, Orlando has even been named one of the best American cities to live in, according to a new report. The City Beautiful ranked No. 17 on the 2019 Top 100 Best Places to Live list and outpaced more than 1,000 cities with populations ranging from 20,000 to 1 million. Among the Best Cities for Young Professionals in America,
Orlando ranked 32 out of 228.

There are several reasons investors are pouring cash into the middle of Florida – and Orlando, specifically.

Approximately 70 million people go to Orlando every year, according to Visit Orlando. After all, Orlando is a magical city with many attractions and entertainment options. Orlando is home to Mickey Mouse – Disney World, Universal Studios, SeaWorld, and other theme parks. Numerous golf courses and events are held at the Orange County Convention Center daily.

All of this tourism and these conventions attract millions of visitors and create demand for a variety of properties – ranging from regular residential properties to vacation rentals and so much more.

Apart from the fun and games, Orlando is also a major industrial tech hub. Adjacent to the University of Central Florida, The Central Florida Research Park plays a key role in the innovation and development of state-of-the-art tech.

The truth is – even once you look past the obvious, this city is full of exciting opportunities and incredible business initiatives.

The Ever-Increasing Population in Orlando

With an annual growth of 7.2%, Orlando ranked as the 2nd-fastest-growing city in the United States. To compare – 2 other fast-growing cities in the USA –  Atlanta, and Denver – have grown by 1.4% and 1.5%, respectively. Currently, more than a thousand people join Orlando’s population every week.

The Orlando Metropolitan Statistical Area (MSA), which includes Lake, Orange, Osceola, and Seminole counties, grew by 2.4 percent from 2018 to 2019. Its current population is just over 2.5 million.

Organic growth accounted for about 30% of Orlando’s population growth from 2018 to 2019. The birth count outnumbers deaths in the region. Positive net migration from both the other states as well as international locations accounted for the remaining 70% of growth.

To put things into perspective, one in every seven Orlando inhabitants moved here since 2010, 49% of them from outside the US.

Experts predict that by 2030, the influx will result in an additional 1,500 people each week, and Orlando will reach an astounding population of 5.2 million.

Forbes placed Orlando in the 23rd position for growing businesses – 6th in the US.

Metro Orlando is home to more than 150 international companies representing approximately 20 countries. No state income tax, no state estate/inheritance tax, and other financial perks are attracting more and more investors every day.

Some big names include:

This booming central Florida city has experienced annual job growth of around 4.4%, making it one of the country’s fastest-growing metro areas. The city is also on track to have its fastest job growth rate (about 500,000 new jobs) in the next ten years.

Orlando’s average employment is expected to grow 19% by 2030, two times the national average.

Orlando’s GDP (which includes the neighboring cities of Kissimmee and Sanford) is more than $144 billion, up 53% in the last ten years.

89.6% of Orlando residents have a high school diploma or higher, and 33.2% have a bachelor’s or advanced degree translating to a promising work pool for the big corporations.

Although the median price of houses traded in Orlando continues to surge by over 25% over the year, homes are consistently being sold off in less than 15 days since listing.

The data for May from the Orlando Regional REALTOR® Association shows an even more drastic boom in the real estate market:

For the past ten years, Orlando has been regarded as one of the finest long-term real estate investment options in the United States.

Orlando’s appreciation rate is so high that despite the country’s recession, real estate in the city continues to appreciate.

A state with no personal income tax,  Florida is a safe haven for investors.

The flexible laws allow businesses to operate with more ease. Tax law in Florida is considered the 4th-friendliest in the country, attracting a huge number of mega-corporations.

As there are a vast number of affordable apartments for rent and favorable regulations, Orlando is also becoming the epicenter for up-and-coming startups.

It’s important to remember, though, that Florida does impose a corporate tax of 5.5%.

Orlando has a large percentage of people between the ages of 25 and 45, primarily young families. The demand for rental homes in Orlando has risen as a result of these factors.

Orlando Is A Top-Notch Tourism Center

Orlando has been boasting economic stability since the beginning of 2018, and it owes much of this growth and expansion to its tourism sector.

Orlando has a well-earned reputation as being the capital of global tourism. From Disney World to MGM and Universal Studios, this has long been a family-favorite destination. Almost everywhere you look, there’s a new attraction to be found.

For those who want a little extra adventure, the wild excitement of the Everglades is within easy reach, while the hot climate and world-class beaches make the entire region a rich and varied destination.

Orland is a multi-faceted city offering an attractive mix of options for any investor. Whatever type of property you’re looking for, your options in Orlando couldn’t be better.

Now, are you ready to invest in the Orlando market and grow your portfolio? Contact us at Evernest.co to get started.

Whether you’re purchasing one Orlando home or one hundred, you don’t have to go it alone.

Mehedi is a freelance writer for marketing, SaaS, and personal development businesses. He’s the founder of PowerhouseBlogger. Mehedi is growing businesses with sizzling writing, one piece at a time.